Thomas E. Ables, native San Diegan, loyal husband, father, grandfather and Aztec fan, passed away peacefully on October 16, 2017, at Mercy Hospital, the same hospital where he was born 91 years prior, on February 2, 1926.

Tom was a proud Navy veteran and alumnus of San Diego State. Tom enlisted in the Navy near the end of World War II and served aboard the USS Alabama in Main Engine Room #1, a self-described “bilge rat.”

He was honorably discharged in August of 1946. A series of events the next month laid out the framework for the next 71 years of his life.

In September 1946, he started his freshman year at San Diego State and became the sports editor of the school newspaper; met Nancy McKean, who would become his wife of 69 years; and saw his first Aztec football game, the first of 788 games he attended over the following 71 years.

In the spring of 1947 he was named the school’s first Sports Publicity Director, and that was the start of his 70-year career in publicity, advertising and marketing. He never retired, working all the way into October 2017.

Tom missed only a handful of football games the Aztecs played on the road. Between 1964 and 2015 he attended exactly 600 consecutive Aztec games, home and away. After that first game in September 1946, he never missed a home Aztec football game the rest of his life. His last game was October 14, two days before his passing. And he attended more than 1,000 Aztec basketball games as well.

Tom adapted to modern technology. More than 1,000 Aztec fans – including NFL players, hall-of-famers, college students and alumni – follow Tom on Twitter, Facebook and email. He regaled his followers with stories from the past 71 years. He blogged. He podcasted.

Professionally, he created groundbreaking advertising and marketing programs for his clients, including the first large-scale introduction of ATMs in the nation with San Diego Trust, the introduction of drive-thru restaurants with Jack-In-the-Box, the development of Rancho Bernardo, San Diego Zoo, Buck Knives, PahaQue Wilderness, Del Mar Thoroughbred Club and many others.

Tom was active with Del Mar for 57 seasons, originally involved with its advertising, and in later years switched to race photography. At 91 he was at the track photographing the horses from his favorite spot on the outside rail in the final turn. On Wednesdays he was a fixture at his regular table in the Turf Club.

Tom worked at Phillips-Ramsey, a local advertising agency, from the early 1950s to 1977. He wanted to work at his own, smaller agency where decisions could be made quickly, so in 1977, Tom and Glenn Collins left Phillips-Ramsey and opened Venture, their two-man shop that offered their clients a fast response and no red tape. Glenn retired several years ago, but Tom worked there for the next 40 years, most of those with his trusted assistant Jill Fisher, and more recently, his son Ken.

Tom has written two books: “The Story of Buck Knives…a Family Business,” and “GO AZTECS!,” now in its fourth edition. He was working on a third book that highlighted his 70 years in publicity and marketing.

Tom is survived by Nancy, his wife of 69 years, son Tom K. and his wife Debbie, son Ken and his wife Charlene, grandkids Thom and his wife Amy, Rick and his fiancée Beth, Steve and Michelle. Tom was preceded in death by his parents Charles and Pearl Ables, brother Chuck and sister-in-law Martha.

Tom will be inurned in a private ceremony at Miramar National Cemetery on another day. In lieu of flowers, Tom’s family is suggesting a donation in Tom’s name to either: 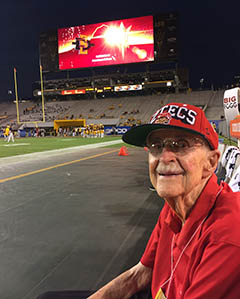 Some of the tributes to Tom from local and national media:

Tom Ables
The 5th and Final Edition of GO AZTECS! is available now on Amazon